Inspired by Antti Lax’s post at LOKI (which in turn was inspired by Ryan Macklin’s post at his own blog), Sami Koponen from Efemeros challenged the rest of the Finnish gaming blogosphere to list the three games that we think every role-playing game designer should be familiar with.

Of course, in any such listing, the real challenge is condensation. I mean, I can easily rattle off a dozen games that are or were, in their own ways, innovative. There are innovations in rules, setting, even presentation, that are worthy of emulation and imitation and challenge traditional notions of how roleplaying games should be done. Note that I am not claiming that these are the only true way to do these things, or even necessarily the best ways. They are, however, pretty good ways of doing it, and should provoke thought, perhaps even inspiration. Being well-read is also valuable so you do not end up reinventing the wheel by accident. Most of the time, when someone is touting their new RPG with words like “revolutionary” or “unbeforeseen”, in practice they end up producing something straight out of 1988…

Note that I am leaving D&D off the list, firstly because it’s obvious and secondly, when you run into a role-playing game whose designer clearly was not too well-read, it’s generally pretty obvious that the gap in their education was not D&D. (If, on the other hand, you see yourself as a game designer and are not familiar with D&D, I recommend familiarizing yourself with at least the Mentzer red box Dungeons & Dragons [1983], Dungeons & Dragons 3.5 [2003] or Pathfinder RPG [2009] and Dungeons & Dragons 4E [2008] to familiarize yourself with the three major strains.)

The list will also reflect my own background. I’m from the traditionalist school of big, heavy rulebooks, GM authority and lots of dice. Though I am acquainted, and have occasionally even worked on or played things like Forge-style indie games or the school of Nordic roleplaying that sometimes eradicates the line between larp and tabletop games, I started with Middle-Earth Role-Play, continued with Warhammer Fantasy Role-Play and my present go-to game is Pathfinder RPG, after playing its two direct forebears for the previous decade. That’s my background, deep in the dungeon.

So, in no particular order…

Any edition, pretty much. The thing that makes Pendragon special is how its ruleset and specifically the Traits and Passions can efficiently and non-intrusively direct the game to genre emulation. The knights of Le Morte d’Arthur frequently

acted obviously against their own interest because of a rigid honour code that is alien to modern thought. Not only is their behaviour rather unlike the heroics of your average D&D campaign or modern fantasy film, it is also sufficiently removed from our way of thinking that its role-playing doesn’t come naturally unless you are very familiar with the source material. Pendragon, then, has Traits that operate on a sliding scale between two extremes, such as Chaste/Lustful or Pious/Worldly. The characters have a number value in each Trait, and the total of every Trait’s two extremes must equal 20. Whenever a situation arises where one of these Traits would come into play (in a dramatically appropriate fashion, of course), you roll against the Trait and successes or failures can limit your actions in the situation. In action, it leads to the player characters falling passionately in love with the damsel they’ve rescued, finding the inner reserves of strength to vanquish the dragon, and killing their fellow knights because of honour. A system like this could be adapted, I think, to any game where the player characters are expected to act according to a rigid code, cultural values or morality that goes against their self-interest. The obvious example is a samurai game.

The second thing that Pendragon does well is the generation game. The game is designed explicitly for a campaign encompassing the entire rise and fall of the Round Table. The Great Pendragon campaign takes 81 years from start to finish. That means you need more than one player character, and more often than not, it’s your player character’s job to make more wee potential PCs. Your character, like in most RPGs, will steadily get better as they adventure. Then, inevitably, they will die. Hopefully, they will do this in a heroic and/or tragic fashion that minstrels will sing of for ages to come and you get to bore your friends with over a pint. Their offspring, then, will not be quite as good as daddy was in his best days, but they will get an inheritance of Glory, titles, land, and generally better gear than papa had (weapons tech develops at a pretty respectable clip during the Enchantment of Britain). The foundation for this is laid out in character creation (at least in the 5th edition), where you start by rolling up the lifepaths of your first knight’s father and grandfather (both inevitably dead).

All in all, I think Pendragon is an excellent example of how to model a very specific genre in a traditional tabletop role-playing game.

As the translator, I am probably biased, but then, this entire post is about my opinion on something, so hear me out. Stalker does a clever thing (actually, it does quite a few clever things) in how it handles combat. There is no separate combat

mechanic or subsystem. Kicking someone’s, or even several someones’, ass is the same mechanical process as is used to see if the characters manage to fix a car engine or browbeat their dealer into giving them a better price. If you have more than one adversary, the extras are defeated in the margins of success. If any are still left after the first bout is resolved, then you look at how the scene has changed and see how the numbers stack this time around. Stalker is not interested in the process of combat, the blow-by-blow take that many (I’m tempted to say “most”) RPGs go for. Stalker is interested in the end result. How, precisely, that is reached is the players’ and the GM’s job to figure out. The rules are just there to help. The system encourages – nay, enforces – roleplaying and tactics beyond “I shoot him with my gun”, and rewards both. It is also impossible to break, save by bribing the GM. (Just so you know, I’m partial to Johnnie Walker Black.) This is relevant because, well, for one thing, it shows you that even a traditional game (and despite being diceless, I think Stalker is pretty traditional, with its long equipment lists, full-page character sheet and whatnot) can be designed without separate combat rules.

There’s a load of other things that make it worthwhile to have a look at Stalker. Player characters have no Intelligence attribute; the character’s wits are those of the player’s. This removes the issue of a player squirming because he figured out the puzzle immediately but his character, IQ turnip, never could. The Flow system is diceless, yet doesn’t include the usual pack of narrative rules elements like shared narration or negotiating outcomes. It is elegant yet robust, which is pretty much everything I can ask for in a roleplaying game system. It is also sufficiently lightweight that if one so wishes, they can easily adapt it to run whatever game or genre they want by merely rewriting one or two skill lists. Indeed, if our hypothetical designer padawan is more interested in writing the setting and the meat of the game (much like I) instead of designing a ruleset, Flow can be licenced under terms that are not only generous but also rather entertaining.

Finally, the rulebook also contains some damn fine GM advice, but that should not be limited to the perusal of putative designers.

The first two editions, at least. I am not familiar with the third edition and do not know if it retains the features I speak of. In any case, Warhammer Fantasy Role-Play strikes an elegant balance between the classless and the class-based with its career system. Characters can start off as rat catchers and camp followers and over time, having fulfilled the requirements of their career, move on to other careers, accumulating experience and skills (possibly also gear, though that tends 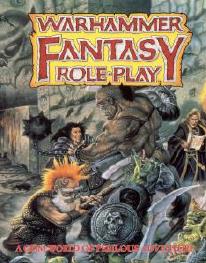 to be transitory) along the way, from rat catcher to cat burglar to vagabond to thief to rogue to demagogue to politician to crime lord to outlaw chief, or perhaps along some entirely different path. This allows the character a natural, organic development while retaining game effectiveness (both breaking the game and creating a completely useless character are rather tricky, especially in the second edition where they fixed the Naked Dwarf loophole). The characters are not nailed down to specific advancement paths, even if their starting careers were randomly determined.

The careers also tell you something important about the characters and the world; this is low fantasy, and the characters are not great heroes from the get-go. They’re not just rootless adventurers who roam the land performing feats of derring-do. They’re just people, who need to work to put food on the table, except half of them are too poor to own a table. It roots them into the setting. Switching careers is also a strong narrative element, such as when the peasant decides he has had enough of toil and sweat under a weary life and becomes an outlaw, or the outlaw figures that the injustices that led him to a life of crime are because of inequality in the deep structures of the society and becomes a demagogue to speak against those who misuse power. The career mechanic is flavourful enough to act as story seeds in and of themselves, but sufficiently flexible to serve the needs of the campaign.

Additionally, WFRP is not afraid to rain shit upon the characters. It’s not overly lethal, and player characters stand a good chance of seeing ripe old age, but getting there will hurt. There’s madness. There’s mutation. Using magic causes both. Critical hits can and will cause limb loss. The PC is not sacrosanct and both violence and meddling with things man was not meant to know will have consequences. The webzine Critical Miss did a series of three articles on the theme and style, a long time ago. They are here: How James Wallis Ruined My Character’s Life, Yes I Sank Your Barge, and Wolfgang’s Guide to Screwing Your Fellow Players. Read them in order.

3 thoughts on “Games Every Game Designer Should Play”