As I mentioned in the previous entry, the main reason I went to LoneStarCon 3 in the first place was because of the Helsinki 2015 Worldcon bid.

On Bidding and Parties

Bidding for a Worldcon is what you’d call a nontrivial matter. Typically, a bid is announced at least two years in advance of the actual vote, or four years in advance of the convention’s proper date. The Helsinki bid was announced only a year in advance. The amount of time, energy and funding even just to take a shot at getting to host a Worldcon is staggering. I was far from the only person to hop over the big pond to help out at the convention (and I probably should reiterate here that I was not a member of the bid committee, just someone to help out with heavy lifting and light banter at LoneStarCon itself – the really hard parts were done by people like Eemeli Aro, Crystal Huff, Jukka Halme and Karoliina Leikomaa and the rest of the bid committee). We printed posters and t-shirts. A sponsorship deal was struck with Lignell & Piispanen, who supplied us with some of their excellent liquors and fortified wines for serving at the room parties. 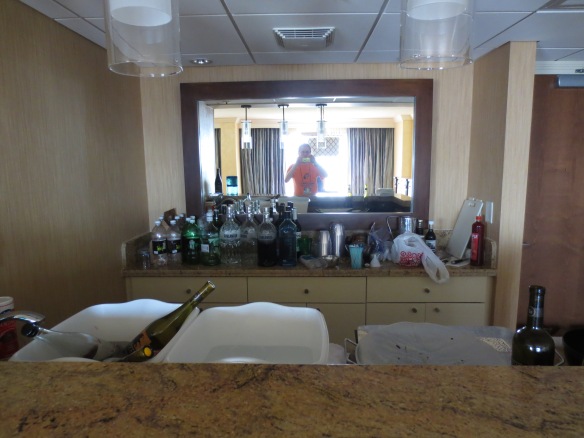 Our bar. Ignore the photographer.

Incidentally, our bartenders Kevin and Andy discussed our drink offerings (and our bid in general, and other Worldcon things) on the Nerdvana podcast. It’s all worth listening, but the part about American culture shock when encountering Finnish acquired tastes is around 1:11. The cognac & vodka blend they refer to is called the “noble spirit”, or jaloviina. It’s one-star because it comes in one and three star varieties, dependent on the amount of cognac in the mix, and three-star jaloviina is just bad cognac.

A key element of a successful Worldcon bid, it appears, is the hosting of successful room parties. These were a new thing to me. In Finland, with the exception of Finncon, conventions stay put and the conrunner pool is smaller, so there’s no real competition for the hosting rights and thus no need for lobbying parties. Also, it’s common for Finnish conventions such as Tracon and Ropecon to have programming run until midnight or even later, leaving no dedicated time slot for an abundance of room parties. I was somewhat surprised by this.

The thing about the room parties is that they all (or at least all the ones I visited) had an open bar and free alcohol, which, as luck would have it, is my favourite drink. There’s been a lot of commentary on the blogosphere about how the membership of Worldcon is getting on in years, but in my view, if you’re gonna have parties with free drink, it’s better if everyone has had some years to develop a mature attitude about alcohol.

I spent a good portion of our three party evenings checking people’s IDs and giving them their “this person can drink” bracelets. Local law, as it was explained to me, required that we card everyone we don’t personally know before we can serve them alcohol, so I ended up checking the IDs of several Finncon guests of honour, one Hugo winner and a number of people in the age bracket of my grandparents. I heard a rumour that our ID check was so strict that our bracelets – which had our advertising – were accepted as confirmed drinking age even at other parties. Hey, I get told that something is a legal requirement in a foreign country, I don’t start second-guessing. Every place in the world is funny about alcohol in its own way. This, I take it, was how Texas does it.

Our parties, incidentally, were pretty great. The first night we served ice cream and tar syrup, the second night we had gravlax, and the third night we had crackers with a variety of jams and preserves, like Santa Claus brand reindeer paté. I have no idea where that came from, but I can appreciate it.

We may have had slightly too much ice cream, and a lot of it was left over after the Thursday party. This formed a problem when one of our coolers had apparently malfunctioned during the light and allowed a lot of ice cream to thaw out. The guys solved the problem by dumping it into the bathtub in our party suite. Unfortunately, the plug was not pulled. The result was… well, see for yourselves. 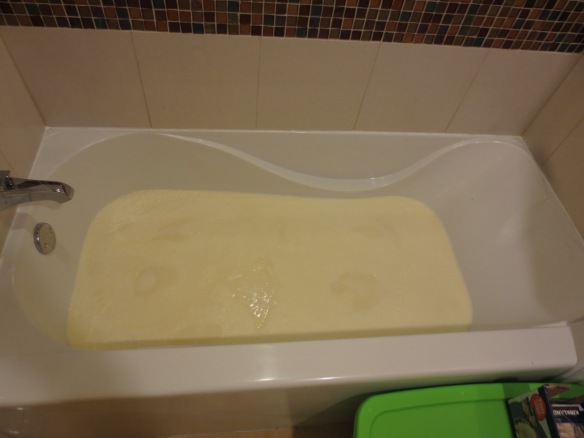 You gotta admit, there are worse scents to have in the bathroom.

So yeah. Friday evening, we were entertaining our guests while in one of the bathrooms, behind the curtain, lurked several dozen gallons of ice cream. Vanilla, ’cause that’s how we are.

I am pretty sure that conrunning is the only hobby where you end up with problems like this. Being able to say “Yeah, we filled the bathtub of the Marriott Rivercenter VP suite with vanilla ice cream” and seeing people’s faces makes up for a lot of stress. Especially when they see the photo.

As for the bid itself, well, we lost. We did not, I hasten to add, fail. For the first two rounds of counting votes, we were in the lead. In the third, once Orlando dropped out with 307 votes, the secondary preferences of their votes took Spokane to the lead with 645 votes against our 610.

A defeat of 35 votes, with 1,348 ballots cast, still rankles a bit. But just a bit. After travelling halfway across the world, I just could not let that ruin the convention for me. I had a wonderful time, met wonderful new people and made new friends, ate portions of food that would have their own area codes in Finland, and had the globe become just a bit smaller for me.

Also, we won half the party prizes, for Best Food, Most Crowded and one we shared with Orlando, Best Excuse for Hosting a Room Party (losing a Worldcon bid). We got enough of these shotglasses that even a minor cog in the larger machinery of the bid like me got one. 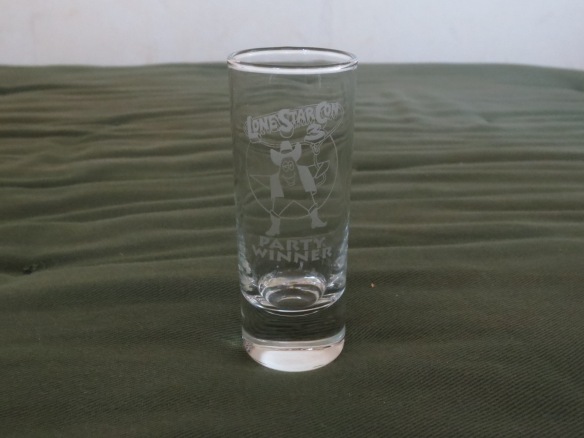 Overall, my convention experience was a good one. Indeed, it was one of the most fun conventions I’ve ever been to. I can easily understand how some fans will travel to the other side of the globe if need be, just to make it to the Worldcon.

Fortunately, I do not have to. Next year, London!