The Obscure RPG Appreciation Day went a couple of days ago. There was a project related to that, which overshot its intended release date by a day. However, the files are now online, and I can tell you all about it! (My excuse for overshooting it by two days is that I spent most of yesterday with my RPG film club. Zero Charisma: very well-made film but I still didn’t like it.)

The Secret Treasure of Raguoc in Acirema Dungeons, the first ever Finnish role-playing game, has been made available in English! The books are free PDF downloads at the Rogue Lantern blog. I was involved in the project as a proofreader, and for my pains I have been immortalized as the Zombie in the Dungeon Book. The translation itself was done by Jonas of Vankityrmiä ja louhikäärmeitä. 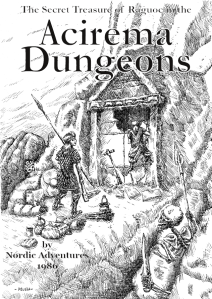 All new art, too!

Written by Risto “Nordic” Hieta and first released in 1986 and very difficult to find nowadays, Acirema is a rather basic dungeon crawl RPG – indeed, no other mode of play is really discussed, and the core of the game is about the characters venturing into the bowels of Acirema Mountain where the evil Raguoc has hidden his treasure. There are dragons, and giants, and dwarves and evil wizards guarding it. Nevertheless, as far as introductions to role-playing go, it’s a pretty fair work. There’s an emphasis on creative solutions and advice on handling negotiation between player characters and NPCs. There are also a couple of clever ideas that I haven’t seen elsewhere.

Primarily, there’s the Zombie character class. The Zombie is the ultimate tagalong player class, usually reserved for younger siblings or uninterested significant others of players. It hits hard, doesn’t think a lot, and can be directed by the other players when the Zombie’s player misses a session. It is not one of the undead and possesses some measure of self-control, but there are no complicated rules involved with it. Also, the Zombie on page 5 of Dungeon Book is a particularly handsome chap, if I do say so myself…

Another interesting bit is how the combat system handles fights with multiple combatants. The default assumption is that all fights are single combats mano a mano, and any archery or spellcasting against the monster happens from the sidelines, not really part of the fight. If there’s more than one player character fighting the same monster in melee, though, they all roll to attack, but only the highest result is counted. However, if the monster hits one of them, the damage is divided between the characters. It’s actually a pretty good way to balance action economy against a solo adversary.

The new books have all new layout (I’m not sure how it was done back in 1986, but the scanned PDFs that I have look like photocopied typewriter pages) and all new art. Otherwise, the translation attempts to be entirely faithful to the original, including its use of the terms “player” and “player character” interchangeably. One concession to modernity was made in the use of gendered pronouns, which Finnish does not have. The game master, Raguoc, is always referred to as male (which he is in the backstory of the game), while players are referred to as female.

So, there it is. Go download the books. Read them. Play the game!

2 thoughts on “The Secret Treasure of Raguoc in Acirema Dungeons!”