I had the pleasure of visiting Zurich for a couple of days, this past January. Between the museums and the operas and one ridiculously well-stocked English-language bookstore, I found the time to visit a local gaming store, called Rien ne va plus.

The website doesn’t look like much, but in a back corner of the store, there was a treasure trove of old gaming material. I use the past tense because I bought most of it. My timing could not have been more perfect. The shopkeeper told me he had just that very morning bought in a pile of his own old gaming stuff for sale, in order to clear some shelf space. There was Teenagers from Outer Space. There was Dream Park. There were old Cyberpunk 2020 supplements. Some of them were in German. Additionally, and most interestingly, there were these 1980s French RPG boxed sets. Especially this one called Laborinthus, made in Switzerland, has production values to die for. I picked it up for 20 francs and later, after checking the prices online, concluded the price essentially amounts to theft on my part. He even threw in a Pendragon novel, Kinsmen of the Grail by Dorothy James Roberts (itself an interesting work in the field of gaming tie-in fiction, but more on that later).

It is a beautiful piece of work. Now, my French, much like my German, is enough for survival but not quite sufficient for deciphering a rulebook, at least not in any intelligent time frame. In all likelihood, I will never play this game and as far as I can tell, it’s not the most elegant of designs. However, as an artifact, the box makes me weep. They don’t make stuff like this anymore.

But don’t just take my word for it. Since I don’t grok French, there wouldn’t be a lot of purpose in me telling you about it, so I figured what I’d do is show you. I present to thee Laborinthus, released in 1988 by Éditions ECG.

Here’s the box. Big, black and pretty. It reads “Laborinthus – Engins, Créatures & Gibier – jeu de rôles”, which translates as “Laborinthus – Gear, Creatures and Game – role-playing game”. I’m not entirely certain how “engins” should be translated in this context, since it can mean more or less any kind of equipment but also machines and is also the specific legal term for hunting equipment. “Gibier” translates as “game” as in the animals you hunt, while “jeu” is “game” as in the thing you play.

Lift the lid and…

Inside, there are books! This first one actually isn’t a book, it’s a folder with loose papers inside. Like it says on the top, “Scénarium pour Laborinthus”, it’s a scenario. For Laborinthus. The title “Marrouques ou Le Roi Rospeux” translates as “Marrouques, or King Rospeux”, as far as I can understand. I get the sense that “Rospeux” is more than just a proper noun, since the term is not explained anywhere. I just can’t translate it, my dictionaries are little help and the French Wikipedia isn’t much help, either. It is the first volume of a tetralogy, which means there are three more of these, somewhere out there in the world…

The next item after the scenario is the rulebook, all 36 pages of it. There’s also an intimidating piece of folded cardboard in there that brings back bad memories from trying to learn Excel. Incidentally, the rulebook is numbered. I neglected to photograph it, but apparently a thousand copies of the game were made and they are individually numbered. The first 100 are special in various ways. Mine is #281.

When you unfold that cardboard, you get… this. “Tables de la Parque”. I think it means “Tables of Fate”, which seems to amount to a combat chart of some description. You can see the game operates on six-sided dice alone.

On the left, you can see a pad of character sheets. On top, there’s the level, then name, then “filiation”, which I think means ancestry or parentage or something to that effect. The example character in the rulebook, Boisisias the Lame (Boisias dit le boiteux), is the son of the fairy Tabitha, for instance. This seems to be a big deal in the game, and the scenario seems to assume that the PCs are the the offspring of King Abraxas. The little boxes on either side of the sheet after that are “Puissance” and “Habileté”, or “Power” and “Skill”. “Sauvegarde” and “Armes” are “Armour” and “Weapons”, respectively. “Gibecière” I’m not entirely certain on, but seems to be for tracking the character’s food stores. “Engins” is their other equipment and “Bourse” is, of course, the purse. I didn’t quite get what the “Curriculum” is, but I think “actions d’Eclat” is a listing of deeds and accomplishments, which seems to be how this game handles tracking experience. 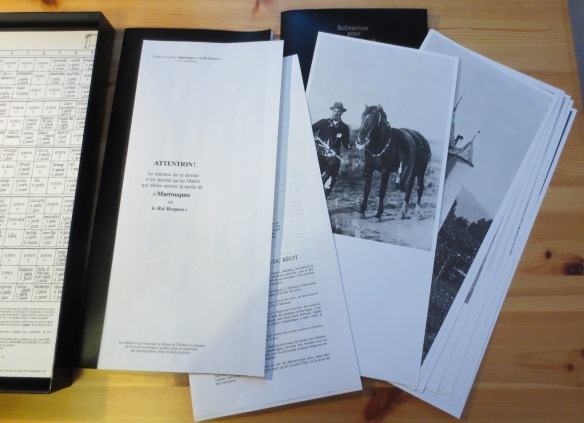 Let’s open up “Marrouques”, then. The presentation of this adventure is interesting. Instead of a book, we get a booklet that gives the Game Master (or Maître du Jeu) an overview of the adventure’s background and the encounters, but the actual content of the encounters is presented in the photographs, all ten of them.

They’re apparently from the collections of the University of Lausanne.

On the flipside of the pictures, there’s encounter information, maps, whatever you need to run the encounter. It’s certainly an interesting way to present an adventure module, and though I’ve seen modules with picture cards or appendices of illustrations before, I’ve never seen it done like this.

Page spread from the rulebook

Here’s what the rulebook looks like on the inside. The illustrator has a very distinctive style.

This is another chart. I think it’s for hunting. I don’t quite get what it is with this game and hunting, or if it’s just my lack of language skills.

I wonder what’s in these…

Beneath the papers and booklets lie these three slipcases. They’re titled Engins, Créatures and Gibier. 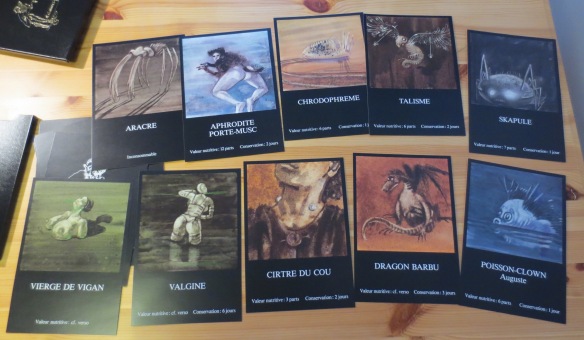 And they contain these illustrated cards. I think collecting these cards, presumably by defeating the creatures therein, is a method of character advancement. “Porte-musc” means musk deer, by the way. 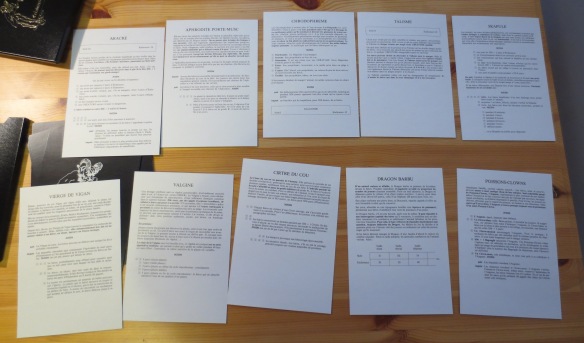 On the flipsides of the cards, we get explanatory text and what are presumably combat stats.

Funky game. Very strange but cool, in that pre-internet 1980’s style. In the end, there’s not all that much text in the game and it seems designed to be run straight out of the box, so I could see myself actually taking the time to figure out and run it. It has a quirky visual style and I’d like to see how that method of presenting the scenario works in practice. I just can’t quite make out what the tone of the game is supposed to be. Is it straight-up, serious dark fantasy or low fantasy and does it have an ironic sensibility (the “egg of Cargue” or whatever that is seems to suggest that)?

If anyone knows either anything more about this game or alternatively enough French to decipher the text in the photos, please comment and share your wisdom.

6 thoughts on “Laborinthus, or, I Have No Idea What This Thing Is That I Bought, But I Think It Looks Pretty Cool”