The annual larp convention Knudepunkt is an odd duck among gaming conventions. It has no single set location, but rotates between Denmark, Finland, Norway and Sweden. It is not a large event, as far as these things go, usually averaging a few hundred attendees. This year broke the record at high five hundreds. Knudepunkt is the cradle of the Nordic larp tradition, the often surprising, sometimes harrowing, usually ambitious and never boring collection of styles of design and play that developed here. For a crash course, check out the book Nordic Larp.

A note on the name: it’s called Knudepunkt when it’s in Denmark, Knutepunkt when in Norway, Knutpunkt in Sweden, and Solmukohta in Finland. Spot the non-Indo-European language. These all mean the same thing, “nodal point”. I’ll be using Knudepunkt throughout this post to refer collectively to all the conventions.

For me, this was my first Knudepunkt. I figured that if I am to edit books for next year’s event, it would probably behove me to find out what the event is like. Immerse myself in the atmosphere, so to speak. Also, I like cons. This one was no exception.

Traditionally, the event itself is preceded by a week of other related stuff in the local capital, where there are larps, parties, local culture and other attractions and distractions. Our team hit Copenhagen on Sunday the 8th of February, so we missed some of the initial stuff like the Black Box Horsens larp con (you know you’re dealing with a serious convention when the run-up to the con includes another con).

I attended a bus tour, the Knudepunkt book release, and the Nordic Larp Talks. I also did a lot of touristy stuff like shoring up the economic prospects of Copenhagen’s bookshops in a bibliophiliac spree that left my luggage at a whopping 300 grams under the airline’s weight limit and taking a guided tour through Christiania, which is a fairly interesting place but probably best discussed elsewhere. Also, I did a lot of hanging out at the Bastard Café, which was the ground zero of A Week in Denmark.

On Tuesday, we loaded ourselves aboard a bus and hit a sequence of interesting targets in Copenhagen and the vicinity.

The first of these was the HQ of Iron Fortress. They’re a Danish company that manufactures professional-quality larp gear for larpers – latex weaponry, armour in both leather and metal, all sorts of garb, makeup materials, even latex tankards for when you absolutely have to flip the table and conk your drinking buddy on the head. And man, they look good.

Moreover, they are affordable. The company doesn’t do direct consumer sales, so I am now idly browsing through the selection at Faraos Cigarer, a Copenhagen gaming and comics store (the finest of its kind in the Nordic countries, I believe), just waiting for an excuse to splurge and start purchasing bits of platemail.

It was an eye-opening experience. I did not know there was enough of a market for this kind of thing to make it economically feasible to produce, but apparently and fortunately I was mistaken. No retailer in Finland, to my knowledge, stocks their products. Of course, there is a very strong DIY element in the larp scene and many people enjoy making their own gear, especially since it is, in the end, often cheaper.

A hundred marks to buy them all
One day to wind them
Three weeks to cut them all
And into a chain coif bind them
– Ilkka Puusaari, Larppaajan käsikirja

The dragon is not alone. Photograph © Jukka Särkijärvi

Their range is also pretty wide, and in addition to fantasy there’s stuff like postapocalyptic/modern gear, like latex baseball bats, lead pipes and wrenches. In addition to latex, which is in the end more for looks than realism, they also make (or are putting into production, I do not recall) another weapon range more suitable for full-force combat. It is apparently a thing in Canada. I would like to say that the term for such games is HARP, but because of obvious reasons, it is remarkably resistant to googling. I tested a sword, and they will cause bruising. Wearing armour is advised.

Completely out of the left field, they also do a zombie run type event called Zombie Løbet.

After Iron Fortress, we headed out to the town of Roskilde, where we hit a local game store called Fanatic, where we could buy the stuff we had just spent an hour drooling over. 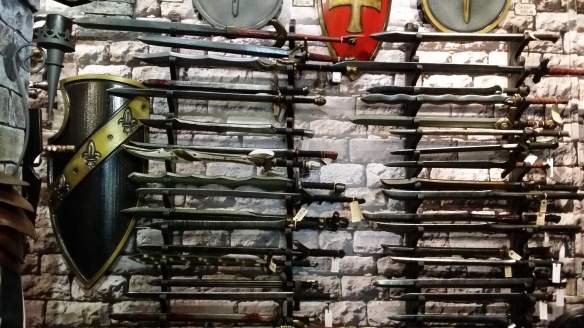 One thing I noticed in my tour of the store, as well as the brick-and-mortar Faraos Cigarer in Copenhagen was that the Danes don’t seem to produce much in the way of tabletop RPGs, which is a marked contrast with the Finnish scene. Even the otherwise ridiculously well-stocked Faraos Cigarer did not carry more than a few. The one I ended up buying as the requisite addition to my collection of games in weirdass languages was a 90s thing called Fusion. Very pretty.

After that, we hit the Rollespilsfabrikken villa in Copenhagen. Rollespilsfabrikken is the biggest Danish larp organization, and since they do valuable work in keeping the youth of Denmark busy with role-playing games, they are subsidized by the powers that be. Like, by renting them this villa that the city of Copenhagen had lying around. It’s 376 m2, too. I am feeling moderately envious here. Our clubs have club rooms. They have a club villa. 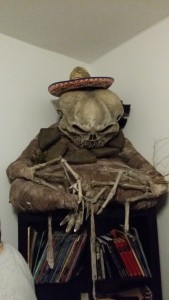 The villa was appropriately decorated. Lord Croak, made for a Warhammer larp several years ago. Photograph © Jukka Särkijärvi.

Rollespilsfabrikken was followed by Rollespilsakademiet, the place where they try to make money at this thing. It’s also the outfit that they publish books through, and most relevant to non-Danes, their website is to my knowledge the only location where you can download all the Knudepunkt books from the same place, including The Book, which was for a long time unavailable and elusive. They also have a load of other books available, mostly larp documentation. They make for fascinating reading, showcasing the Nordic larp tradition. Many also have beautiful photography.

Following the final stop of our tour was the release party for the 2015 Knudepunkt books. The release happened without much fanfare, and Claus Raasted repeated most of what he said there at next day’s Nordic Larp Talks.

Another tradition of Knudepunkt is the Nordic Larp Talks, a series of short speeches or presentations about larp and related topics. The event was held at the Copenhagen main library the day before Knudepunkt itself started. I am not going to describe the content of the talks themselves because they were streamed online and you can go check them out yourself. For what it’s worth, I found Ann Kristine Eriksen’s, Massi Hannula’s, Eleanor Saitta’s and Evan Torner’s talks of special interest, though they were all good. There’s also Claus Raasted’s very short book presentation, and he’s always entertaining. (He’s also the guy who did the narration on that archery video that you probably saw recently. If the professional larp organizing thing folds, he’ll always have a future as a voiceover artist.)

After the talks, we adjourned to Bastard Café for board games and beer. The next day, Knudepunkt 2015 would begin.

2 thoughts on “In the State of Denmark: Knudepunkt 2015, Part the First – A Week in Denmark”