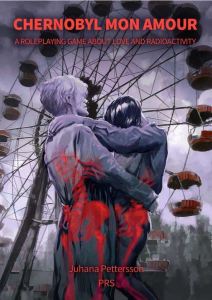 Juhana Pettersson’s unique role-playing game Chernobyl Mon Amour, funded last year, is finally out and the backer copies have been sent. I did the translation, which was a fun gig. Especially the bit where I spent a couple of days reading up on the differences between Russian and Ukrainian transliteration in English as opposed to Finnish before concluding that going with the original differentiation is the best idea.

It’s a freeform game with very little in the way of rules mechanics. In Chernobyl Mon Amour, you play criminals who have fled into the Chernobyl Zone of Alienation. There, in the community of other former criminals in similar straits, you have the opportunity to forge a new life and find love. The focus of the game is less on problem-solving, adventure and violence and more on romance, coming to (possibly perverse) terms with the ever-present radiation, and day-to-day life in what’s essentially a postapocalyptic society.

You can get the game on DriveThruRPG in both PDF and PoD softcover: https://www.drivethrurpg.com/product/233986/Chernobyl-Mon-Amour