And now for the second part of my dive into 1991, when the Soviet Union fell, the Japanese economic bubble burst, Gene Roddenberry passed away, and most pertinently, Vampire: The Masquerade was first released.

Here there be SPOILERS for Blood Bond, Blood Nativity, and Alien Hunger.

As I mentioned in the previous post, I’ve been unable to source “Blood at Dawn”, the 16-page adventure that came with the Storyteller’s screen. However, there is a synopsis on the White Wolf Wiki. I think the interesting bit is that it’s probably the first appearance of a mage character in World of Darkness. Mage: The Ascension would not come out until 1993. Set in Gary, it’s definitely a part of the Chicago Chronicle. 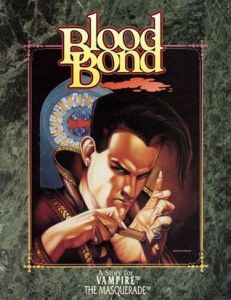 So, picking up from where we left off, Blood Bond. It is a 32-page adventure module with the charming tendency to save space by referencing the stats of major characters in Ashes to Ashes. They were reprinted together in Chicago Chronicles, Volume III, which somewhat mitigates the issue. It’s a variation on The Killing Joke, told in Vampire. There’s a vampire, Neally Edwards, whose old associate-cum-enemy, to avenge an old wrong, decides to drive him into joining the Sabbat. Along the railroad tracks. I very much get the sense that the PCs are an audience to someone’s novel outline. There’s good stuff in this, but it’s more material I would rip off than use as is. For instance, early on there’s a scene in a theatre that’s attacked by a Sabbat pack, and during combat a staked elder is revealed from the shattering concrete of the walls. There’s also a Sabbat initiation at the end, which is nifty. I’m pretty sure Blood Bond is the earliest good look at the Sabbat in the game, and that later material contradicts this pretty heavily. The text expects the PCs to play nice with them, which is not really a thing I would see happening were I to run this to an even superficially WoD-literate players in the year 2020. Blood Bond is the last of the Chicago books from 1991.

There’s also a couple of early adventures that do not take place in Chicago.

The major one of these is Alien Hunger, which is set in Denver and looks a lot like the game line was still looking for its identity. It’s a starter module type thing, which starts as the characters wake up after their Embrace, in a dark cellar. The house upstairs is on fire. An effective start, at least. The twist is that they’re not organically grown vampires, but alchemically created, Embraced through the power of SCIENCE, but the undead Louis Pasteur. Unfortunately, poor Louis dies before the coterie ever gets to meet him, which feels to me like a bit of a cop-out. I mean, if you’re gonna go gonzo with historical characters as vampires, at least write in some interaction.

The adventure itself is mostly the PCs finding out what happened, who did it, meeting the Prince, and probably joining the Camarilla. Despite its outré premise, the execution is pretty standard.

There’s also Blood Nativity, a 16-page intro adventure published by Atlas Games that’s also about the characters being Embraced and then discovering what they are and feeding for the first time. This one’s set in Cleveland. If you can find it – unfortunately it’s been taken down from DriveThruRPG – it’s worth it for the NPCs. The sires of different clans for your neonates are a cool and usable bunch, except for the Gangrel whose only thing is liking Cleveland Cavaliers. The silly thing is that the sires Embrace the characters for a purpose, but the module as written is only Embrace, Vampires 101, and first feeding. There is enough background on the political situation to build on, at least. It’s an odd duck.

And finally, we come to the fresh breeze of authentic 1990s role-playing game 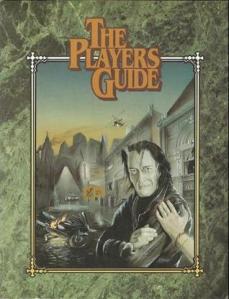 design, The Players Guide. Just what your Vampire chronicle needs, more crap. There’s more character options, like new archetypes and a merits & flaws system that later became a core feature. This is some cool stuff.

And then there’s pages upon pages of hyperspecific new skills like Carpentry or Forensics, some of which are sub-skills or even the sub-skills of sub-skills. To take a dot of Toxicology, you have to have a dot in Chemistry or Biology, but both of those require you to first have a dot in Science. And there’s also more powerful Disciplines! These go up to ten! And the Clan Prestige advantage, which is clan-specific and takes up many pages. And new clans.

The Followers of Set, Assamites, Giovanni, Salubri, and Ravnos all make their first appearance here. Ravnos is also, as studied in 2020, really pretty awfully racist. I am very interested in seeing how the clan will be reinterpreted for V5.

Because 1991, there’s also an equipment chapter, with loads of details on different firearms and melee weapons. Unfortunately, the noble katana does not get a separate entry. Several different armoured vehicles do. This chapter feels like it ran off Twilight: 2000. There’s also a really specific set of rules for throwing weapons, with a note that you really don’t have to use these if you don’t want to. The tone is generally very chatty like that.

There’s a chapter on the daily unlife of a vampire with notes on an etiquette for favour trading, equipping your haven, treating your ghouls right, and so on. Finally, there’s a chapter of short essays on role-playing from the designers of the game. Some of them have aged poorly, others feel like self-obvious. I would imagine that these texts have cast a long shadow in certain gaming scenes.

I also read Milwaukee by Night, which came out in 1992 but was packaged into Chicago Chronicles, Volume III with Blood Bond and Ashes to Ashes, so I went through it as well.

So, Milwaukee. Not the first place that comes to mind when I’m thinking of a place where it’d be interesting to set a game book. However, it is close enough to work as a satellite of Chicago, and the early-1990s gaming scene would have been amused. Back in those days, Gen Con’s home town was Milwaukee. The book even discusses the halls of power that are the MECCA Center.

In the World of Darkness, Milwaukee is a violent place where death is cheap and licks are Embraced pretty freely since they keep getting killed by werewolves. Also the Prince is freshly dead. This came out in the same year as Werewolf: The Apocalypse, but feels like probably before it. This features a lot of werewolves, but it lists them as belonging to clans, not tribes, and names Mouse, Coyote, and Eagle. Later in 1992, Vampire’s second edition would also come out, but at least the White Wolf Wiki lists this as a first-edition book.

The first half of the book is NPCs and city guide. Incidentally, Milwaukee by Night is where Carna of Tremere makes her first appearance. In V5, she causes a major schism in the clan and goes her own way.

The second half is the adventure “Psychomachia”. I mentioned the Prince is dead? This where the coterie kills him. Prince Merik has gone insane and become a serial killer, who creates elaborate Hannibal-style death tableaux and also tells the coterie to figure out who’s doing masquerade-breaching murder. He then sends them off out of town into a werewolf ambush, where they get their asses kicked and staked. There’s rules telling what kind of Courage rolls the vampires need to make to remove the stakes. This pretty bluntly contradicts the rules stating that staking paralyses vampires and renders them completely helpless. The Players Guide has a sixth-level Potence power that allows you to move Zootopia DMV speed while staked, but that’s about it. And this is the first of two encounters in the adventure that are scripted to end with the PCs captured. Bad writing, this. I kinda like the structure of the adventure and the idea of the serial killer Prince, but these encounters just don’t work.

Next I think I’ll read some Werewolf…