I was originally going to start off this post with something along the lines of “I don’t know what you did over the weekend, but if you weren’t at Archipelacon, I had way more fun than you did”, but it looks like we weren’t the only ones with a reason to be happy.

Archipelacon was a four-day sci-fi convention in Mariehamn, on the island of Åland, branded as “the most fun you can have in a demilitarized zone”. The guests of honour were Karin Tidbeck, Johanna Sinisalo, Gary K. Wolfe, Parris McBride, and following the tradition of our Åland conventions of inviting up-and-coming, lesser-known authors, one George R.R. Martin.

And it was great. 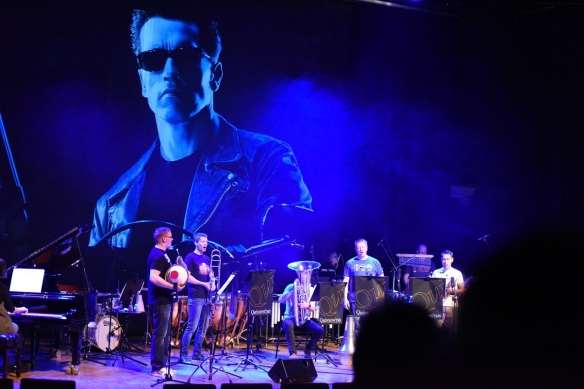 The Quinsonitus ensemble. After the intermission, they would be back. Photo by Henry Söderlund, used with permission.

Thursday dawned grey in Tampere. This is the summer, so dawn comes at around 3 a.m., which should give you a good picture of how early I had to get up to get on the bus that’d take me to the Turku harbour and onwards to the ferry that would take us all to Mariehamn. The Tampere fandom had reserved a bus for our own use.

Actually, I didn’t even get up. Being the neurotic that I am, I never went to sleep at all and spent my time watching stuff off Netflix. For the record, A Million Ways to Die in the West cannot be recommended.

The con really started at the bus stop, with all the other sleep-deprived fen, and continued on the ferry, where I met Johanna Sinisalo and Cheryl Morgan. I’d been recruited to be Johanna’s minder for the convention and was doing both the “Fear and Loathing in Hugoland” panel and masquerade with Cheryl. In addition, I had the literary Hugo discussion on Friday morning and my talk “Science Fiction and Role-Playing Games” on Sunday.

The Hugo stuff deserves a post of its own and anyone reading deserves it to be there, since it’s a bit off topic and not particularly fun this year. I will also do a separate post on the sci-fi game talk.

Apart from my own items, I did not see a whole lot of program. What I did see, however, was great. On Friday evening, there was the Deep Space Overture, a concert where a brass and percussion ensemble from Turku called Quinsonitus played a selection of music from science fiction film and television. They were very good.

I also saw Johanna Sinisalo’s guest of honour speech. She discussed how she discovered reading at the age of around two years, became a feminist at five and was given a five-year artist grant last weekend. This, in Finland, is a very big deal. Then, she also won the Finlandia Prize in 2000 with Not Before Sundown, which was also a big deal, because back then our most prestigious literature award did not usually go to speculative fiction. Incidentally, if you haven’t read it, do so. Now. I’ll be waiting. She also read an excerpt of the upcoming translation of her novel The Core of the Sun, a scene where the narrator ate chili, one of the last sources of pleasure legally available in its dystopian Finland. The description was synesthetic, almost erotic in a way. I am a self-confessed fan of prolonged descriptions of characters’ inner lives while they’re eating (I sometimes dig up this scene from Cryptonomicon and read it aloud to myself and marvel at it), and this was right up my alley. I need to read that book. I have it somewhere, I am sure.

I saw Shimo Suntila declare himself the Last Trash Writer of Finland, in a reprise of the event at last year’s Finncon. This time, neither Boris Hurtta nor Tuomas Saloranta were there to dispute the claim.

I went to see the latest installment Jukka Halme’s quiz show “Kuis?”, where contestants are forcibly drafted from among late arrivals, scoring is only tangentially related to correct answers, and it is possible (and common) to answer the question “What is your team name?” wrong.

On Friday evening was the Game of Thrones burlesque show. “The night is dark and full of tassels”, indeed… A lot of ketchup, there. It’s been suggested that if Helsinki wins the Worldcon bid for 2017, there might be a repeat performance. (And you can vote! We can make it happen, folks!)

There’s a climbing mast at the local Seafaring Museum. Yours truly at top, Hugo nominee Ninni Aalto climbing up, Henry Söderlund behind the camera. Photo used with permission.

The Masquerade, This Time No Song or Dance

On Saturday night, I hosted the masquerade! This has become something of a tradition since I was first forcibly drafted into the job by Jukka Halme, all those years ago in Jyväskylä. Cheryl took care of wrangling the judges (Parris, Johanna, and herself), while I did all the posturing on stage. This time the technology worked perfectly and I did not need to entertain the audience with poetry recital, dances or singing while the redshirts were trying to figure out how to fix things.

People keep calling it the cosplay contest, but I think it’s useful to keep the terminology separate here. Archipelacon (and Finncon) has a masquerade show. It’s not half as serious as a major anime convention’s cosplay show. It’s whimsical. There’s a low entry threshold and only two series and the the other one is for those who need their parents to accompany them on stage. While the level can be very high, it doesn’t need to be. This year, one guy showed up with a costume he made during the convention with stuff he found in the garbage bin outside the conference centre. I accepted two new sign-ups for the show during the show.

While at Archipelacon, we had to limit our prizes to the top three, at Finncon the tradition has been to give something to everyone. While one of them is the Best in Show, I myself have an award from 2008 for “Best Sucking Up to the Judges” (we were a team of characters from Petri Hiltunen’s graphic novels, while Petri was one of the judges), and can remember from the same year “Best Use of a Toaster” (accessorizing a Battlestar Galactica costume) and “Most Unexpected” (the Spanish Inquisition). From 2010 I have the award for “Best Fool’s Dance” – and that’s the time I was hosting!

All the Masquerade participants. Prizes went to Loki and Bilbo on the far right and Miss Darth Maul, right of the centre. Photo by Simo Ulvi, used with permission.

What Makes This Fandom So Great

Finally, I saw the panel “My Life in Fandom” with George R.R. Martin, Parris McBride, and Gary K. Wolfe. They talked about their experiences in the fandom over the decades, such as how Gary had gone to a convention dressed in a normal academic fashion – you know the type, wool sweater with leather elbow patches – and very soon someone asked him which Doctor he was. Parris and George related the tale of how they’d first met, in a sauna in a Cleveland convention. On the ladies’ side. Joe Haldeman was on hand to introduce them. Parris ended the panel with a note that resonated with me and summed up why I do this and why Archipelacon was one of the best conventions I’ve been to. She asked us to go and meet someone new.

It’s about the community. It’s about friendship. It’s about being able to hang out with a like-minded crowd without fear of being judged for who we are or what we like (Unless it’s Highlander 2. But we judge with love.). The reason I saw relatively little programming was that I spent most of my time at the bar, meeting new people. We talked literature, politics, gaming, comics, science, academics, conrunning, languages, beer, history, and everything else with people from a dozen countries. We had fun together. There was karaoke, and a chocolate tasting, and we all bought bags of books without even denting the selection at the Alvarfonden book sale. I ended up with a folder full of Swedish filk and a bottle of twelve-year-old ouzo from a Swedish fan fund auction. It’s kinda like Callahan’s Crosstime Saloon, except in real life (and I’m suddenly struck by the suspicion that in fact, it may be the other way around). A lot of the online discussion within fandom has these past couple of days been less than happy, and Archipelacon was a helpful and welcome affirmation that there’s a real reason why we’re doing all this. To quote the Fan Guest of Honour Jukka Halme of Finncon 2014: “Fandom is love.” 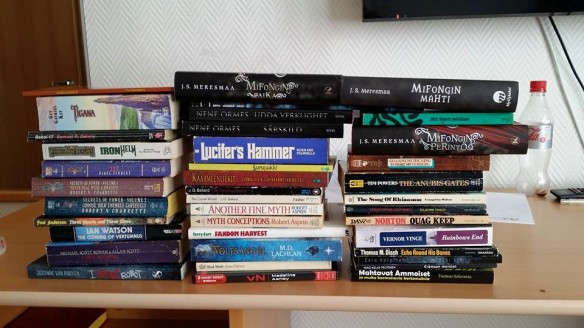 My book haul. And this was cheap. Photo by Jukka Särkijärvi.

1 thought on “Archipelacon: A Convention Report”