The science fiction convention Finncon 2014 took place last weekend in the sunny city of Jyväskylä. Along with Ropecon, it’s one of the two conventions that I consider my home away from home.

It’s kinda like that, actually. Except with more aliens and alcohol-based humour.

I was originally only scheduled for one program item, the Hugo discussion panel on the Friday before the con proper. The Finncon Friday in Jyväskylä sort of gently eases into the convention, with only a single program track and a smaller venue at the Writer’s House, close by to the university buildings where the remaining two days took place.

The panel was great fun. 90 minutes with Guest of Honour Jukka Halme, Carolina Gómez Lagerlöf, Tommy Persson and me talking about the nominees in the four fiction categories for the Hugo Award this year, moderated by Marianna Leikomaa. We all agreed that Ancillary Justice is the best novel and Wheel of Time is too damn long regardless of whether you like it. More on these in a later post that I already wrote up last night in a sort of a flow state before realizing that leading my convention report with 1,000 words of literary criticism is not an idea with merit.

I was also there to promote Ropecon, which led to a lot of sitting behind a table next to the Helsinki in 2017 Worldcon bid table. Ropecon is in two weeks, and we handed out lots of fliers. It was interesting to note how many people were not really aware of the convention even though the overlap between Finncon’s and Ropecon’s target audiences is great and Ropecon’s been around for over 20 years now.

One reason I like Finncons in Jyväskylä (the hosting city rotates between Helsinki, Turku, Jyväskylä and Tampere) is that they’re generally smaller and there’s this social signal-to-noise ratio that is a lot clearer than in the other cities, where there are more people who just drop by on a whim or come to gawk at the spectacle (Finncon is free, so the threshold to do that is very low). Thus, a larger portion of the attendees are into the fandom. It feels like home. As the fan guest of honour Jukka Halme commented: “Fandom is love.”

Because I spent most of my time at the Ropecon promotion table and because it was frankly rather hot in there, I did not go see a lot of programming. On Sunday, I caught the duel between Shimo Suntila and Tuomas Saloranta for the title of the Last Trash Writer of Finland, where the two prolific (the Finnish small publishers are currently releasing anthologies at a sufficient clip that I can no longer afford to buy them all, forcing me to start writing short stories so I can get author copies – my first story is going to be in the Hei rillumapunk! anthology, which is coming out this autumn) authors and editors talked smack and went at each other with boffer swords. Judges were bribed, illegal weaponry was utilized, the electric kannel sang, and the end result was a tie.

“You interrupted my story, you scoundrel!”
“It was bad!”
“You’d still publish it!”
– harsh men, harsh language

I also managed to catch Jukka Halme’s guest of honour interview, though it was late in the day and I’m afraid I nodded off at one point.

The guests of honour, by the way, were magnificent. I might ascribe Finncon’s success with guests of honour to luck, but really it’s about skill and experience in first inviting cool and interesting people and then treating them with the honour they deserve, which in turn brings out the best in their own speeches, panel discussions and general attitude at the convention. They’re kept happy and in turn they make the attendees happy. This year we had Hannu Rajaniemi, the erudite author of the sublime Quantum Thief, Fractal Prince and Causal Angel; the just as erudite and staggeringly prolific Elizabeth Bear (winner of Hugos for “Tideline” and “Shoggoths in Bloom”); Jukka Halme, a great man of wit; and Scott Lynch, a man of great wit (and author of The Lies of Locke Lamora). Also featuring, as ever, a horde of other authors both foreign and local and the honourary Finn Cheryl Morgan, who reported on the convention daily (Part 1, Part 2, Part 3, Part 4, Part 5, Part 6).

And then there was the masquerade. Oh boy, the masquerade. I was asked to do some minor co-hosting for the masquerade a couple of hours before the event itself, with the actual hosting being done by Cheryl. I was just supposed to announce the halftime show, during which the judges deliberated and passed their final judgments on the contestants. The halftime show was Juha Jyrkäs reading poetry from his Kalevala poem workshop and excerpts from his own epic poem Ouramoinen, likewise in troichaic tetrameter.

Sounds easy? Yeah, well. Because of reasons, the length of the halftime was rather in excess of the amount of material that had actually been reserved to fill it, and our professional entertainer had a rather tight schedule himself, as he had to go do that thing professional entertainers do and head off to an actually paying gig. This left me with a mike, an audience and a somewhat awkward situation.

So, I improvised some stand-up comedy, danced a bit, sang a bit and was fortunately rescued by some of the masquerade participants who picked up when I could no longer come up with more material. I’d like to thank Laku, Paavo, Eemeli and all the rest for helping me salvage the situation. The audience was entertained.

This is one thing that I love about Finncon. The audiences are intelligent and understanding. There were a hundred people in the room and not a single heckler.

Mind you, I prefer the traditional model for the masquerade, where the awards ceremony is separate from the contest proper, giving the judges all the time they need. A halftime show like this requires a different skillset from panels and presentations. It calls for showmanship and stage presence, and I am not sure how easy it is to dig up the people who can pull it off. This is something to keep in mind for Finncon 2016 in Tampere and next year’s Archipelacon (because of reasons, there’s not going to be a Finncon next year so to fill the gap we’re banding together with the Swedes and producing Archipelacon in Mariehamn).

I also bought a pile of books. The sci-fi flea market is the bane of my existence. It’s not that it’s expensive, since it really is not, it’s just that carrying all the books home is a lot of work. I even picked up some French children’s comics because they were only one euro apiece. My French is not particularly good. Also, neener neener neener I’ve got The Causal Angel. 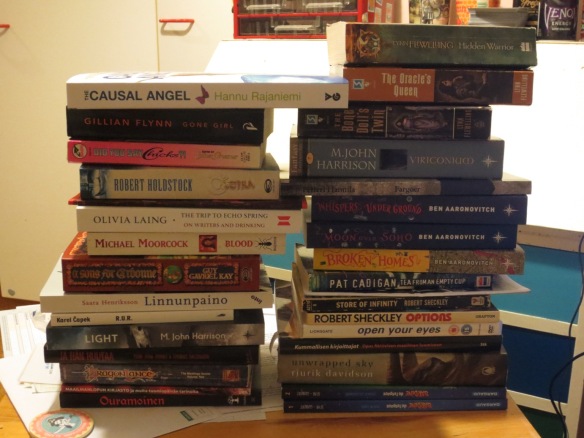 This Finncon was the end of an era. It is the final convention of a nine-year period when there was a Finncon every year, the longest such unbroken streak in the history of the convention. Next year, we go to Archipelacon, while Finncon will make a victorious return in 2016, in Tampere.

So, that was Finncon. It was lovely, one of the most fun conventions I’ve been to. I am proud to have done my small part in making it happen, and proud to be a part of the community that produces such joyous events, and creates a place where people of all backgrounds can come together, united by their common interest in strange fiction and all of its modes of expression. It gives me this warm, fuzzy feeling inside.